Guides and discussions of all things specific to the Ice Lancers of Azeroth.
Post Reply
First unread post • 6 posts • Page 1 of 1

I've been raiding Heroic for about 2 months,im about 960 ilvl equipt and i really feel as if i can get more damage out of my gear.
I don't know if the problem is with my rotation and if it's with my gear stat's.

My armory: https://worldofwarcraft.com/en-gb/chara ... r%C3%ACass
Logs : https://www.warcraftlogs.com/reports/a3BPKDG6Cb1rYnWT/
i had some internet issues on the lost 2 bosses so those logs should be ignored.

The only other problem i can see is the 200 ping but im not blaming that for all the dps im missing.

Thanks to everyone that reads/reply's to the post!!
Top

You're casting a lot of unbuffed IL. A lot of it seems to be from double-casting IL.
If it's unintentional, you should probably look into it. You're losing quite a bit of dps from that.

Also, you don't really need to precede every IL with a frostbolt.
Top

as well as casting IL after BF flurry, because you dont do it sometimes.
also dont hard cast flurry its pointless.
Top

I took a look at your logs and found the following things, I hope this helps you improve. If you have any questions feel free to reply or join us in discord in the #questions channel. 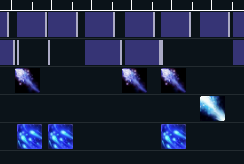 A flurry under the buff of Brain Freeze applies winters chill, this is a debuff that makes the target act as if frozen.
Frozen targets use a passive you have called Shatter which makes your spells have a much higher chance of critting.
This is why you always want to use fb > flurry > il or eb > flurry > il since both fb/eb and il will shatter and crit into the winters chill. This is because flurry's and ice lance's travel speed are high whilst frostbolt and ebonbolt's speed are slow.

Your ping might have some role in the shatter / flurry combo's. If you join discord we could take a look at that but this is probably not that big of a deal.

You seem to be cancelling casts and have a high down time. ABC, always be casting. Never interrupt your casts and never don't cast.

Your high downtime might be caused by bad movement or planning. Try to plan ahead with your positioning to move towards or out of the way of mechanics within the GCD's of your flurry combo's. We call this GCD walking. Also don't forget to use your shimmer, shimmer has a low cooldown and can be cast within any other spell so you can relocate without having to cancel your casts!

Your gear overall is fine. You have some mastery pieces, no tier 20 2 set and your relics/trinkets are not the best but that won't matter in a week or so with prepatch coming out as relics lose their traits and only ilvl matters and mastery will become a decent stat to have.

Your opener. Try to precast. This means when you see the pull timer, start casting ebonbolt at 3/3,5 sec remaining. This makes your ebonbolt his the target at 0 of the timer and gives you a lot more time to mess around.
Your frozen orb in your opener was delayed, try to push this earlier. (EB > Flurry / IV > IL > Frozen orb)

And finally, your cooldown usage is fine but can be improved a lot. Try to keep an eye on when Frozen Orb and Ebonbolt are coming off cooldown and use them ASAP instead of waiting 10-20 seconds.

I hope to see you claim a rank 1 soon! Like mentioned earlier, come by the mage discord #questions if you have more questions or simply reply here.
Mage class discord: https://discord.me/alteredtime
Mage resource document: https://docs.google.com/document/d/18Cm ... sp=sharing

Is this still viable as for now in shadowlands? I mean the priorities in the “spoiler”?
Top

Is this still viable as for now in shadowlands? I mean the priorities in the “spoiler”?

Roughly, the change is rather than a BF proc causing Flurry to add a timed debuff on the target it now buffs our next two spells. This means during a normal rotation, when you get a BF proc we usually cast FB > Flurry(BF) > IL > IL. There is still a finite duration to the window we have to cast those two spells but it's a bit more flexible than before.
Top
Post Reply
6 posts • Page 1 of 1

Users browsing this forum: No registered users and 9 guests